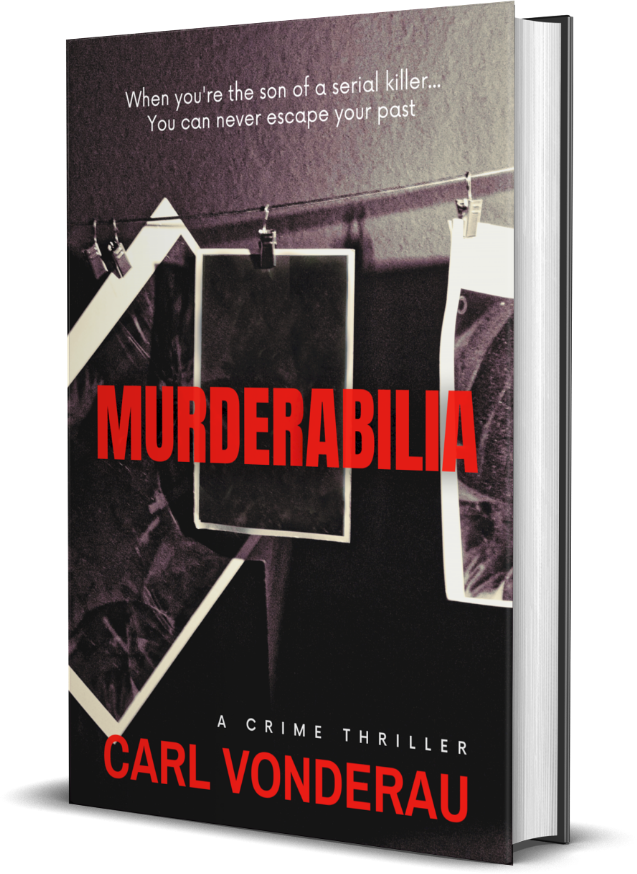 Three decades ago, a madman committed thirteen unspeakable killings. Now they’ve started again, and his son is the sole suspect…

William MacNary’s father stamped his picturesque post-murder photos onto the nation’s horrified consciousness. After changing his last name and refusing to visit his dad’s jail cell, he’s mortified when an anonymous caller threatens to out him as the infamous serial killer’s son. But after the discovery of a dissected body, gracefully arranged in his father’s signature style, all evidence points to William replicating the gruesome gallery…

Desperate to clear his name and protect his family, William delves into the frightening portfolio for clues to the identity of the copycat. But with fresh crime scenes creeping closer to home, his best chance at survival may lie with speaking to the man he swore to forget.

Can William stop his dad’s biggest fan before he carves another fatal masterpiece?

Murderabilia is an extraordinary standalone suspense thriller. If you like dark crime fiction, fast-paced action, and intricately drawn characters, then you’ll love this disturbing tale.

“Murderabilia by Carl Vonderau is a fascinating crime novel, and a look into the human soul as well, and at all that makes us the men and women we become. An excellent read!”
—Heather Graham, NYT and USA Today bestselling author

“…a powerful, poignant, chilling, and original thriller. Carl Vonderau uses his gift for prose and character to transform the classic serial killer tale into something more haunting and powerful: a tale about family and how an act of physical violence perpetrated by one member inflicts emotional damage to all.”
—Criminal Element

The devil. Harvey Dean Kogan. My father. Everyone had heard of him, but few had studied his history as much as I had. He’d killed his first victim more than forty years ago in a suburb outside Chicago. Bonnie Sendaro had berated a clerk and yelled at another woman’s child inside a Montgomery Ward Department Store. Kogan decided she needed to be punished. It was ten o’clock at night, and no one else wandered through the store’s parking lot when Sendaro walked out- side. He knocked her out with his wrench and laid her on the torn back seat of his van.

Harvey Dean Kogan didn’t possess Sendaro through torture or rape. In the ten minutes it took to strangle her, the Dürer drawing he’d seen at the library flashed into his mind. “That’s when I became an artist,” he later told a journalist. In an abandoned park, he severed her arms with a hacksaw and scissored off the sleeves of her blouse. Super Glue held her hands together in prayer. He used the same glue to attach the turned-up blouse sleeves to her arms. Kogan mounted his creation on a tree limb with baling wire.

In that darkness, Harvey Dean Kogan must have set up a tripod and adjusted the camera to a wide aperture. Maybe a fifteen-second shutter speed. A cable release would have stopped it from shaking. In the final image, a big part of the tree stood in an otherworldly haze of light, as if he’d shone a flashlight on it during part of the exposure. The Chicago Sun-Times received that black-and-white photo. Bonnie Sendaro’s praying hands seemed to float palely between two dark branches, the stars and moon slightly blurred in the black expanse behind them. There was no sign of blood; blood would not taint his art. The press recognized the reference to the Dürer pen-and-ink drawing and began to call him “the Preying Hands.”

He made that photograph when he was nineteen, seven years before I was born.

After dinner, Polly and I stood beside the orange tree outside my front door. For a moment we both took in the perfect San Diego temperature and starry September sky. Even the starved grass gave off a delicious smell. Her bracelets jingled and she put her hand on my shoulder. “Is it possible we’re overreacting?”

I thought of the wacko who’d sponsored an internet contest: “A Hunt for Kogan’s Kids.” Then, the “Pyramid Power” woman who, twenty years before that, had concluded she was my father’s soul mate. Hoping it would reach us, she told the Chicago Sun-Times that “I want to be your sister and stepmother.”

“You know as well as I do that we’re not overreacting,” I said.

We walked to her pickup in the driveway. A passing car’s headlight beams raked the honeysuckle hedge and lit us up. Polly clasped my arm, her tight grip like an extension of her gaze. “You know, I can’t ever remember our father comforting me. Even his hugs didn’t seem natural.”

“Mama wasn’t a hugger either,” I said.

“Mama’s a whole other story.”
I looked up the street at the silhouettes of bikes and balls on the lawns, at the driveways with shadowy basketball hoops or boats. Would those children still play with Garth and Frieda? Maybe not after their parents learned about our past and the kinds of fans that our history attracted. Or, worse, perhaps those kids would never stop asking our children about their grandfather.

“Could our father have had another lover?” I asked. “Maybe we have a brother. Mama would know if it’s even possible.”

“He kept bigger secrets than that from her,” Polly said.

Thirteen secrets. That number hid behind everyone’s lips in Blue Meadow, Illinois. Maybe Mama could have been unaware of one or two or even five victims, but thirteen? Even Polly at thirteen years old, and I at eight, should have noticed something. When the local kids burned 666 into our lawn on Halloween, we had to kill the grass around the number to erase it. Mama drove to another town to buy groceries at ten o’clock at night. School was the worst. None of the other kids talked or looked at us. It was as if we were caked with stink. I used my fists to make them feel me. Even before the fights started, I wept with rage. Once, three sixth graders held me down until Polly swooped in to pull them off. The school wanted to send me to a psychologist, but Mama refused. She thought that psychologists and psychiatrists peddled the kind of thinking that only took you farther away from God.

Beside me, Polly glanced at her left arm, at the blue dolphin tattoo with a halo that peeked through her bracelets. The tattoo covered the patch of skin she’d started cutting three months after our father was arrested.

“No matter how hard we try, we can’t stop remembering, can we?” Polly said.

I pulled her close. She threw her arms around me and squeezed. More cars passed, mothers and fathers grinding home after late nights at work.
Polly said, “I’m a grown woman now. I’ll survive. Even reliving it.”

I didn’t think even she was sure of that. I wasn’t.

She set the play pirate hat on the passenger seat of the truck. Her hand dug into her pocket for her Wonder Woman key ring; my sister never carried a purse.

“Like hell you will. I’m not letting this cocksucker change a single thing in my life.”

She was the only gay woman—maybe the only woman—I knew who called people that. “Just be careful,” I said.

Her ropy, elfin body climbed into the pickup and she roared off. The truck flashed red under a streetlight. I couldn’t imagine anyone hurting Polly. It had taken her thirty-one years, but she was indomitable.

And if anyone tried, I’d tear him apart.

“Murderabilia (is) a story that will lay a cold finger of dread on the back of your neck. Vonderau is a terrific writer who has written a terrific book.”
—Karin Slaughter, New York Times bestselling author

“Murderabilia explores the dark corners of the soul in a riveting story sure to grab your attention and keep you reading till the final page. This is a superb debut from a striking new voice.”
—William Bernhardt, author of The Last-Ditch Lawyers

“Murderabilia is a dark, tense, sophisticated story about just how deep and far the sins of the father can reach into the innocent lives of his children. Carl Vonderau is a new (and very scary) voice.”
—Jacquelyn Mitchard, bestselling author

“Grim but compelling. Savage and beautiful. Poignant yet heart pounding. This book is a phenomenal piece of crime fiction that contains a grueling serial killer, well-drawn family history and incredible characterization. I couldn’t put it down and am looking forward to this author’s second book (and third and fourth and fifth…)”
—Amber Cowie, author of Rapid Falls
“This is an excellently written serial killer with a twist…. It’s a tense and suspenseful whodunnit novel, secrets from William’s past are gradually revealed as the story progresses and finally culminate in a strong ending that surpassed all my expectations. One extra note from me is that it was quite thought provoking, not something I usually expect from a book about murder! It made me question whether or not it’s possible to sympathise with a murderer, if there’s ever a justification for murder and the role of death in art. If you enjoy crime thrillers and serial killer stories, you’re going to love this one. It’s the right amount of gory and disturbing!”
—The Most Sublime Reviews Blog
“I was literally on the edge of my seat, goosebumps and all, waiting to find out what was going to happen. A huge congratulations to Carl Vonderau whose epic book really kept me up at night!”
—Booked Up Girl Blog